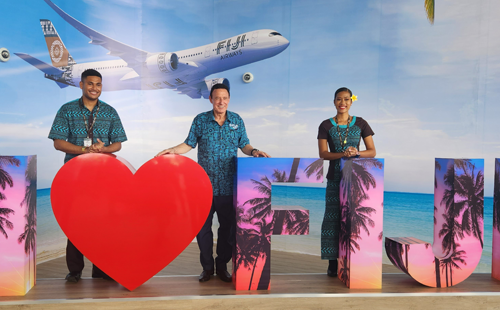 Fiji Airways is committed to delivering exceptional experiences and is willing to continue to be a strategic national asset.

In marking the first anniversary of borders opening yesterday, managing director and chief executive Andre Viljoen said that 1 December, 2021 will go down in history as the day that Fiji took the first and biggest step in recovery and resurgence by opening its borders to international visitors.

Viljeon said the national airline played a vital role in being ready to fly in hundreds of tourists including former Fijians who had not been able to travel for close to two years.

He said being ready took a consolidated and concerted effort involving Fiji Airways, the Ministry of Health, Airports Fiji, the Fiji Hotel and Tourism Association and numerous other government and international agencies.

“Fiji Airways never lost sight of what the airline means to the country and how we contribute to the economy.”

“At the height of the pandemic, we were looking to the future… the thought of failure never crossed our mind because the country was relying on us,” he said.

He said for the last five months up to October, received 60,000 visitors.

“We’ve welcomed 497, 086 people to our shores from January to October… 70 per cent of these people were brought in by Fiji Airways.”

“As at October, we have reached 90.6 per cent of visitors arrivals compared to 2019, but the news gets even better; our weekly bookings are growing at an average rate of six per cent every week.”

Viljoen said the amount of work they put into making the national carrier a better airline post COVID is exemplified in the number of international awards they have claimed over the past 12 months.