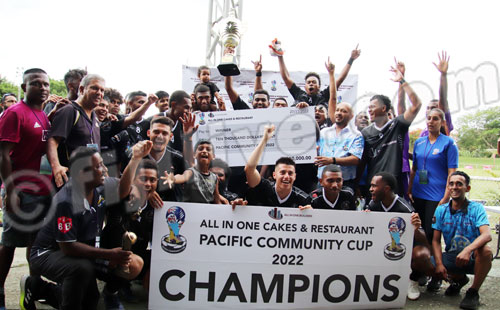 The 18-year-old netted the winner to see his side dump Nadi 1-nil at Prince Charles Park in Nadi.

Speaking to FijiLive, the Year 13 student of Kamil Muslim College, who scored five goals said the support from the Ba fans and also the Ba women winning the 2022 Digicel Inter District Championship boosted their confidence in them.

“We like to thank the Almighty God for giving me the strength and courage to be able to help my team.”

“It was not an easy journey. We worked really hard. Since we are all young players, we have a huge task especially since it is the last tournament of the year. And we didn’t want to let the fans down.”

“We wanted to give something back to them before Christmas so from our side, this is a Christmas gift to all the Ba fans.”

“All the goals and awards I have won are for the fans here. After a long time, we won a tournament and our fans kept supporting us when we were not winning any tournament and that’s what describes them as the best.

“They always believed in us and before the game, our officials told us that we need to make a clean sweep at Prince Charles Park and that if the Ba women can win IDC then we also have to show the fans that we can win the Pacific Cup.”

“It really motivated the players. We congratulate the Ba women’s team also. It was also amazing to see them supporting us and backing us after their win.”

“For me, this is my first tournament win with Ba and I have always dreamt of this moment. It means a lot to me. I’ve grown up watching this club. I’ve been a diehard Ba supporter and player and representing the club, wearing this jersey is just a dream come true for me and to be able to help my team, I cannot describe how I feel.”