Pacific Games next for Nai 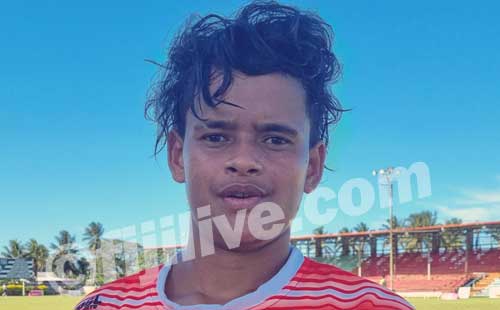 Young Rewa midfielder Imeri Nai is determined to retain her spot in the Digicel Kulas team for the 2023 Pacific Games in Solomon Islands.

After a break-out season with Rewa in the Digicel Women’s Super League, the 19-year-old was drafted into the Kulas squad for the OFC Nations Cup and retained her place in the team which featured in the Four Nations Tournament in Australia last month.

“Coach Lisa Cole selected me during the league game and she asked me if I wanted to play in the national team. At first I thought it would be training but I was selected in the best 22 for the OFC Cup and then coach Flemming put my name in the Nations Cup.”

“My parents knew that I was playing football and they always supported me. They just tell me to focus on my school work and play relaxed football.”

Nai relished her first-ever international test tournament and said she is eager to don the national jumper again at the continental multi-sport event.

“Just this year, I got in the national team and wearing the jumper feels different. It’s like national pride and it was a wonderful experience.”

“Like when my name got selected I felt I was over the moon. I’m the first person from my family to be part of the national team.”

“I couldn’t believe that I was called to the national team because I used to start from the bench mostly in the games. I wasn’t confident enough on the field because I always had nervousness that what my neighbors or relatives would say when they see me play football.”

“It was a big achievement for me playing in Australia because it was the first time I started playing 90-minute football. I think the Australian teams and PNG were very strong. They always tried to stop us from scoring.”

“I learnt a lot about football from them like the combinations and the areal ball plays. They were fast players and playing to their level was tough. They had really good speed and most of the players were in their top form.”

“I take it as a learning experience and we have been told of the Pacific Games. So I’m really working hard to be part of that.”

“Coach has told us that our training will not stop after the IDC and he also advised us to do our personal training in our free time. I just want to improve on my fitness and also work on my position,” she added.

The 2023 Pacific Games will be played between 19 November to 2 December.

Former Supervisor of Elections, Mohammed Saneem has lodged a compla...