‘This one’s for you Dad’: Rekha 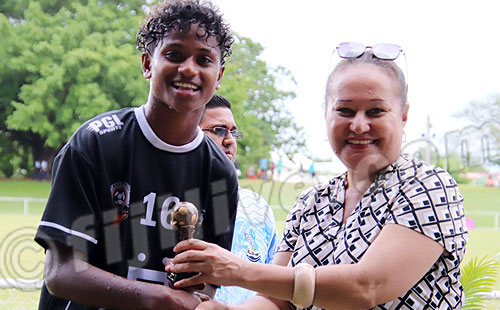 Rekha, who is the youngest player in the Fijian Kula squad revealed to FijiLive that her father was the only support she received from childhood to pursue her football career.

“When I was young people didn’t like that I played football and they would tell my dad why is he allowing a girl to play football which is mainly a men’s game.”

“But he never told me to leave football. He always told me that football is not about girls or boys but it’s about what we love.”

“Getting this award, I was in shock. I didn’t believe that I’d win this award.”

“So whatever I achieve through football, I always dedicate it to my dad because he’s the biggest support I’ve got in my life. He always boosts my confidence but keeps me humble. He also comes to watch all my local games and I always try my best to make him proud,” an emotional Rekha said.

The 18-year-old also relished the struggles she went through in cementing a spot in the National team this year.

“It’s been a tough tournament. We’ve been through so many challenges like our games, team bonding and all the challenges.”

“I worked hard a lot to be in the team. Being the youngest player in the national team is a challenge.”

“I did my best in my training and got to be in the line-up for the Kulas in the National team at the Pacific Nations Series.”

“I work during the day time and every afternoon for the love of football, I cut down roaming around with friends. I just do my training with the Ba women’s team and sometimes just train at home.”

“When the selection was taking place, I knew I had to give my best and the only way to do that was by lifting my performance in the Super League.”

“My name was not called in the first line of players for the qualifiers but I never lost hope and then coach Lisa Cole put my name in the second batch and I got in the best 11 for the first game.”

“I want to continue with football and I know my struggles will pay off. This is the first time that I won an award in my two years of playing football. I’m just taking things step by step,” she said.

Hutchison ruled out for rest of ...