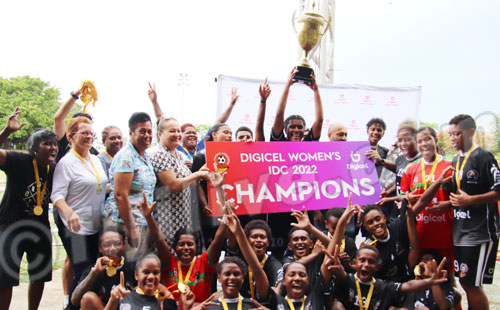 The Tamanitoakula-led women’s football giants came from behind and defeated arch-rivals Labasa 4-2 and snatched the women’s IDC title at Prince Charles Park in Nadi yesterday.

Tamanitoakula said the young players struggled hard to fill in the shoes of the missing key players in the team and also thanked their parents for allowing them to play.

“It’s a win for our young players in the team.”

“They deserve this win more than any other senior player in our team.”

“The young girls played a huge role because we missed some of our senior players in the team who had injuries and commitments.”

“These girls had exams yet they came for the training and stayed in the camp.”

“After classes, they’d come to the camp and train and till late night would study so that showed the reason for us to win.”

“We dedicate this win to them and their parents for believing in us and giving them a chance to play.”

“It was the first time for our young players to play at the district level and they broke barriers. It’s not about who scores and who doesn’t. It’s about team bonding and how hard everyone worked. Everyone was determined to win and we are proud of our win,” she added.

She also mentioned the young players will be given equal game time in the 2023 Digicel Women’s Super League to work on their weaknesses.

“Every day we learn from each other and these girls have asked to be part of the team next season.”

“They have shown their interest and we are happy to have them in the team.”

“Yeah, we all make mistakes but we need to be given time to rectify them and these girls will be part of our super league competition.”

“They are really good players and very content on the field. We have seen them make mistakes and learn from that and it’s part of football. Nobody is perfect but these girls never gave up,” she said.

Coca-Cola Games to be held in Ma...