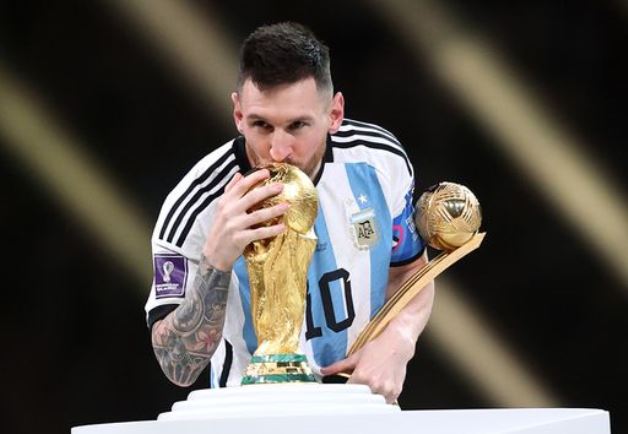 Lionel Messi scored two goals and then another in a shootout as Argentina beat France 4-2 on penalties after a 3-3 draw to claim a third World Cup title despite Kylian Mbappé scoring the first hat trick in a final in 56 years.

Messi joins the pantheon of soccer’s greatest ever players, alongside Pele- a record three-time World Cup champion from Brazil and Diego Maradona, the late Argentina great with whom Messi was so often compared.

He has achieved what Maradona did in 1986 and dominated a World Cup for Argentina.

The torch will one day pass to soon to youngster Mbappe, whose late goals lit up one of the most dramatic finals in the tournament’s 92-year history and emulated Geoff Hurst’s hat trick for England in 1966.

Messi was in scintillating form from the start, putting Argentina ahead from the penalty spot and playing a part in Angel Di Maria’s goal that made it 2-0 after 36 minutes.

Mbappé, on the other hand, was anonymous until scoring two goals in a 97-second span — one a penalty, the other a volley from just inside the area to take the game to extra time.

Messi tapped in his second goal in the 108th minute, leaving Argentina on the brink of the title once again, but there was still time for another penalty from Mbappé to take the thrilling game to a shootout.