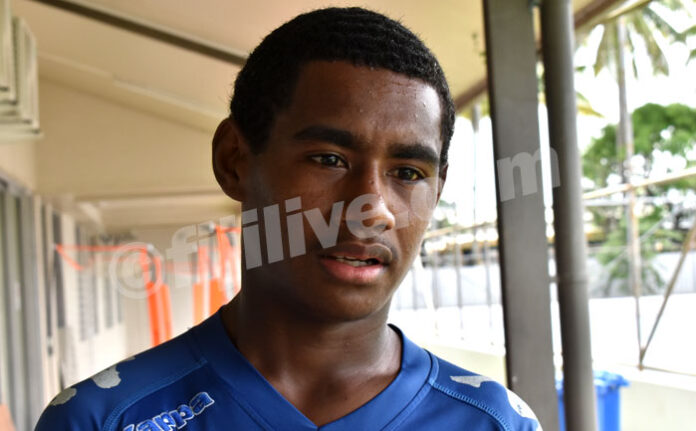 16-year-old left-back Isimeli Gavidi says he will be playing for his grandfather and former national midfielder and Ba legend Meli Vuilabasa at the OFC Under 17 Championship in Suva next week.

The Year 12 student of Natabua High School in Lautoka said Vulabasa inspired him to become a footballer after gaining huge fame locally and internationally for Fiji.

“I feel happy that I’m in the Fiji team.”

“When I was young, my grandfather would take me to the soccer ground in our village. He was a very well-known footballer at his time in Fiji and he played for Fiji overseas.”

“He always told me to believe in football because it is something that can take me to great places like him.”

“I always follow in his footsteps and try to be like him. I talk to him every day in the evenings and he guides me.”

“Just last year, he told me to try my luck by taking part in the Secondary school IDC and he is the only person who ever had confidence in him.”

“I’m just playing this OFC for him. I want to make him proud and give my best because he has been supportive throughout when people did not believe that I would be part of the Fiji team. Wearing the white jersey will be a huge achievement for my grandfather,” an emotional Gavidi told FijiLive.

Natalecake native of Ba highlighted the challenges he encountered on his way but he was determined to seal his spot in the national team.

“It was hard for me because I live in Ba and study in Natabua. Traveling was tough but every day my grandfather would wake me up early and tell me to do basic training like bridge and sit up because I usually have heavy meals.”

“Sometimes, in the training at school I would not have soccer boots and also when I played on the ground at my village. But my grandfather told me that those things should encourage me to work hard.”

“I got my first soccer boot last year and then I realised that it’s not easy to get things. We have to sweat and work hard like the top players.”

“Natabua lost in the semi-final and I thought I wouldn’t be selected because I got a little injured but a few days later, my teachers told me that I have to attend a trial. My grandfather took me for trials and I got scared looking at the training and the coaches were very strict but he told me that this is the only chance for me to play for Fiji.”

“I joined the training and it was hard for me to adjust to the food and the training. We love eating root crops but in the camp, we follow a strict diet because we have to stay fit.”

Gavidi added that his aim in the OFC is to defend well and disallow teams from scoring goals.

“My strengths are that I’m good at using my defensive skills to stop the players coming from the front and I want to keep it stronger. OFC is like a once in a life thing and we have to win this.”

“Everyone is determined to make it to Peru for the World Cup and coaches always tell us that if we want to go to Peru we have to work hard at the OFC.”

“I have aimed at not allowing the other teams to score against us. Even with how hard the others try to score, I just have to take the ball away from them and not give them a chance.”

“My biggest support is my grandfather and my wish is for him to come and watch my game. He’s been a bit sickly and it’s an important tournament for me,” he added.

Fiji will open its OFC campaign against Samoa at 7 pm next Thursday at the HFC Bank Stadium in Suva.