Prove yourselves, Patels tells U17 players 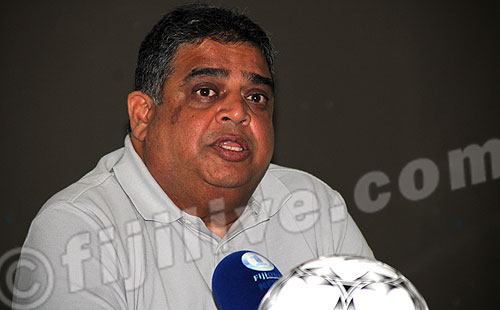 Fiji Football Association President Rajesh Patel has urged Fiji U17 players to play as a united front and prove their worth in the OFC U17 Championship.

As the team prepares for its first match against Samoa tonight, Patel has urged the players not to play for themselves only, but to play for the support they have been receiving from their parents and the people involved.

“Now it’s time to give back to your Vanua, to your parents and to everyone who has helped you. This is our home country, our soil, our motherland and we can’t let anybody take it away from us and you can’t let anybody win from us.”

“Tonight I expect you all to do it. Fly the Fijian flag high, fly the Fijian spirit high. We are known as warriors but play with discipline, according to the coaches because you’ve got the best coaches around assembled for you.”

“Those who have come from overseas, this is Fiji, your motherland. You have been accepted well with the brothers here. So let’s prove it that wherever we can be, we are proud to be Fijian.”

Patel, while giving his good wishes to the team said he has a lot of confidence in the players and has requested them to deliver their best together as a team.

“I’ve got every confidence that you boys can do it. We want to be there at the first game but one game at a time with the vision that on 28 January we want to be playing in the stadium again in front of the whole country how proud we are.”

“The Under 20 have already qualified, they’ll go to Mexico and Asia before Indonesia for World Cup. You all will be given the same treatment but the first start is tonight then the next game is on Thursday and we have to go through to play on the 28.”

“All the best and I’ll be watching your game. May God bless you,” he added.

Fiji will take on Samoa in its first match at 7 pm at the HFC Bank Stadium in Suva.