Parties want a recount of votes 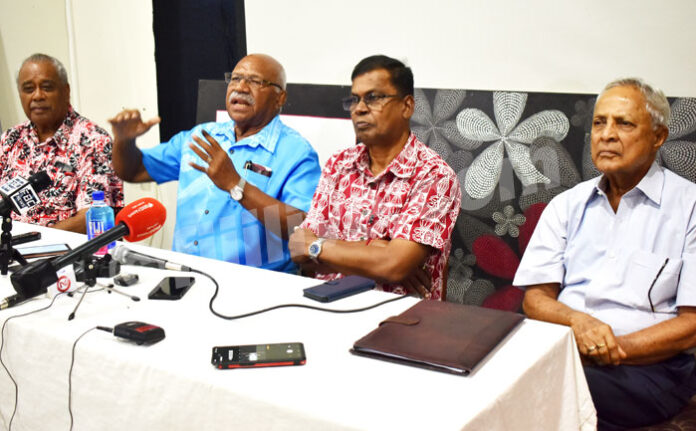 The leaders of the People’s Alliance, National Federation Party, Fiji Labour Party and Unity Fiji are calling for a recount of the votes in the 2022 General Elections.

In a joint press conference this afternoon, Sitiveni Rabuka has called for the immediate halt in the tallying of votes, until a forensic audit of the election system is conducted.

Rabuka said they are putting the Electoral Commission on notice.

“We are seriously considering non-compliance of being sworn in as Members of Parliament, because of the questionable results so far announced.”

“I as the leader of the People’s Alliance with the concurrence of Political Parties call for FEO to recount the votes within the full protocol of results made available.”

“At the present time, ballots are still being counted at the arena and are not being made public or available contrary to the protocols of the count and various polling venues as counted last night,” he added.

Rabuka also highlighted the serious question about the glitches.

“The serious problem with the anomalies or glitches in the election app last night called into serious questions of the integrity of the whole election process.”

“The leaders noted the abrupt stop of the announcement of the provisional stop results after the second updated that was at 10.15pm.”

Rabuka, Professor Biman Prasad, Mahendra Chaudhary and Savenaca Narube also claimed that Supervisor of Elections, Mohammed Saneem is inexperienced and lacks credibility and they do not have any faith whatsoever in him.

SOE should resign after investig...