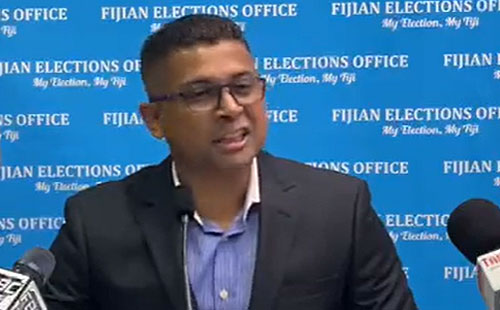 The Fijian Elections Office is concerned with the low pre-polling voter turnout this week.

Supervisor of Elections Mohammed Saneem in a Press conference today revealed the statistics of the pre-polling that began on Monday .

Saneem said the pre-poll turnout has not surpassed 70 per cent in any of the venues as of the statistics so far.

“The turnout is not very good.”

“We still have the election day where 692000 voters will be voting where it is becoming now more necessary than ever for us to find more initiative to enhance voter turnout.”

9,517 final number of pre-polling voters and today’s pre-polling was to take place in 71 venues.

As of 3 pm today, FEO has completed pre-polling at 594 locations around the country.

FEO is yet to be in contact with teams from 62 venues as they are still out there in pre-poll areas.

In terms of day three, the turnout for day three currently stands at 65.8 per cent for 115 venues which excludes 19 pre-poll venues out of the 115 while FEO is yet to get information.

For day two, the figure stands at 69.1 per cent for 141 venues whilst FEO is still waiting to get figures from two more venues that voted on the day.