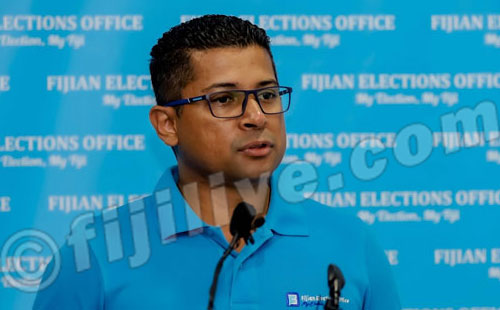 The Fijian Elections Office says it is deeply concerned and astonished at the manner in which the ABC has propagated false information.

In a letter addressed to the Australian Broadcasting Corporation, the Supervisor of Elections, Mohammed Saneem said the actions of the ABC reporter need to be evaluated against codes of conduct and the ABC must take accountability for the same.

Saneem said clearly that ABC must take full responsibility for its conduct and the conduct of its reporter.

“We require the ABC to publish widely an apology and also exact clarifications of its mischievous actions without any reductions in the prominence it had given to the initial story,” Saneem said.

Saneem said that the Fijian Elections Office note that the entire story that was published appears to have been designed to bring disrepute to the Fijian electoral process.

He said the reporter mischievously proceeds to pass judgment on several matters and appears to give her personal subjective opinion on all those matters without any actual sense or proof.

“At the point, it is clearly obvious from the body language of the reporter that she is fully motivated to make those judgments perhaps out of personal interest.”

“We question how the ABC allows such reports that are complete without any merit and evidence to flourish on its channel,” Saneem added.

Earlier this week, the Fijian Elections Office received and responded to a letter from the National Federation Party marked urgent which claimed that the General Secretary of the FijiFirst Party, Aiyaz Sayed-Khaiyum had visited Star Printery in Raiwaqa in the early hours of Thursday, last week.

The NFP also claimed that Sayed-Khaiyum ordered the CCTV cameras on the premises to be turned off and that he refused to leave at the request of FEO officials because ballot papers were being printed.

The NFP is also alleging that the police were called and Sayed-Khaiyum refused to leave at their request.

FijiLive has reached out to ABC for a response.

FTUC concerned about Mine worker...