I have nothing to hide, says Saneem 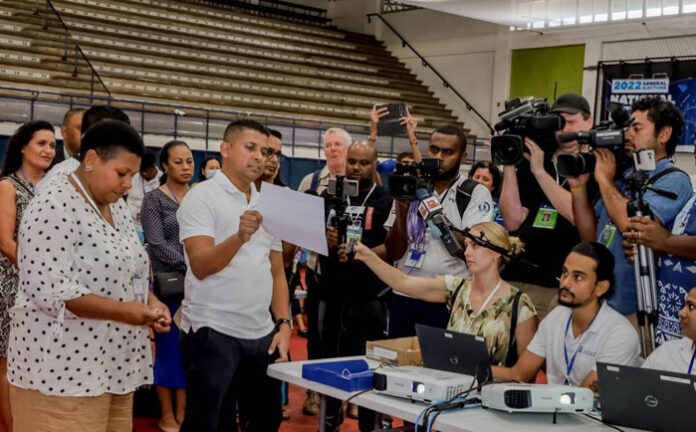 “I have nothing to hide. I’m showing you how everything is done at count centre.”

This was Supervisor of Elections Mohammed Saneem’s response after questions were raised on the counting system by political parties yesterday.

Saneem made it clear that provisional results have been stopped and that final results are being put on the FEO app.

“I’m showing you, it’s counting manually. There’s a lady right there she’s touching ballot papers, picking it up and recording it.”

“Anybody calling for a manual account in Fiji, tell me what else can I do to make it more manual than that. What else do you want me to do? There is absolutely nothing else you can make more manual. It’s the same as the accounting process from the history of elections in Fiji. People picking up ballot papers and saying 12345.”

Saneem also highlighted that official scanned copies of the results are made public to the party agents at the count centre at the Vodafone Arena in Suva.

“Conspiracy theory have gone to an extent that now we have political leaders coming up and asking for intervention in the electoral process simply because their own general secretaries and registered officers failed to update them of what’s going on.”

“The law says that the Fijian Election Office is supposed to put up the pink slip. Forget the pink slip; I’m giving you the white copy which is the original that we scan into our system.”

“The pink slips as you can see are all around the count center. Once counting concludes then anybody can walk around that place with an electronic device. In 2018, we put the pink slips outside as soon as we put it up one person came snatched it ran away with it the other parties did not have access to it.”

“So for fairness, everything is inside you can’t run away with the pink slip. It’s not only about getting the information so that we can verify. What will happen with the results that they are quality? I’ve already giving them this data. It’s signed, it’s scanned, it’s unedited so it’s time to again realise what the reality is.”

Saneem clarified that no political parties have inquired the Fijian Elections Office in regard to polling station results.

He has also urged people to stop spreading rumors about the FEO app saying it’s a ‘glitch’.

“Everybody who’s been making statements, I urge you to ensure that your statements are filled with accuracy and it reflects the situation which is the arrangement with the FEO and the parties. Political parties asked us to give them the scanned version of the protocol of result because they can’t all get the pink copy from the polling stations so we are giving it to them in addition to that we are also giving them the final results that are being entered into the result management system.”

“So everything is there for that same polling station you can verify. None of the political parties have so far raised any inquiries with us regarding the results for any polling station. Yesterday night a lot of members of the public messaged me after the results software showed additional numbers which is what was one of the causes of the taking down of the software because everybody was getting misled and then we sent a media alert to the media to ask them not to publish that result which is what the right thing should have been and that’s what we did.”

“This morning the word glitch is now being used by the parties to say that we lost votes. That’s just playing words. We don’t play with word. We show you. This press conference is taking place at the count center. The latest rumor going around is that I have been restricted from coming into the count center,” he explained.