Army support to keep the peace 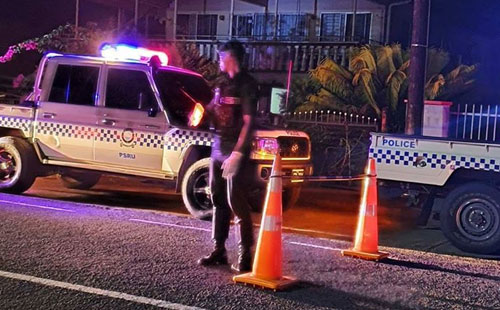 The Republic of Fiji Military Forces together with police will work to protect and maintain the security and stability of all Fijians.

This comes as more reports and information that has been received by police of threats made against minority groups who are now living in fear, following the recent political development.

In a statement, Police Commissioner Brigadier General, Sitiveni Qiliho said he was in a meeting today with the Prime Minister Voreqe Bainimarama, Minister for National Security and Policing, Inia Seruiratu together with the Commander RFMF Major-General Jone Kalouniwai, where he said an agreement was reached for RFMF personnel to assist police with the maintenance of law and order, amidst growing concerns of racial tension.

“It’s a consensus decision based on official reports received, intelligence and information gathered and the evaluation of the current security landscape where minority groups continue to be targeted and information of planned civil unrest received.”

“I also reiterate my earlier call for social media users to be mindful and aware of the implications their posts are having on the overall security landscape.”

“The continuous attacks on minority groups have aggravated the current tense situation. While the Army and Navy personnel have been called in to assist, police will continue to lead the overall security operations led by the Chief Operations Officer (COO) Assistant Commissioner of Police (ACP Abdul Khan who will be collaborating with the RFMF to ensure the safety and security of all Fijians as we see through the current political process,” Qiliho said.