USAID Office to open in Suva next year 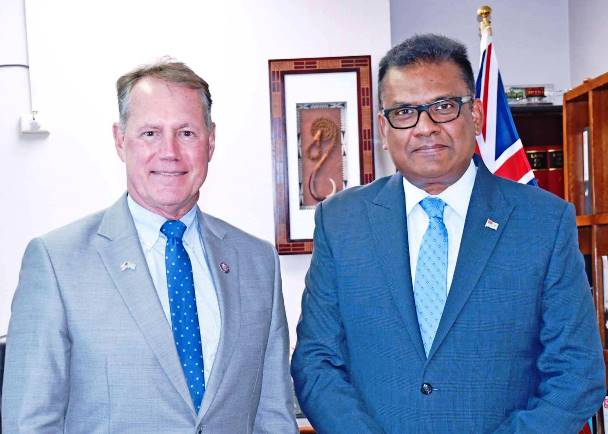 Fiji has welcomed the recent announcement of the U.S Government to open a USAID Office in Suva by 2023.

Permanent Secretary for the Office of the Prime Minister and Foreign Affairs, Yogesh Karan in his recent meeting with the Representative of Hawaii’s First Congressional District, Congressman Edward Espenett Case in Suva, commended the decision and acknowledged potential areas of engagement for deeper bilateral relations especially, among our young people.

Karan thanked the United States for the support provided to the Fijian Government in COVID-19 response, particularly through the provision of much-needed Moderna vaccines.

As a founding member of the Indo-Pacific Economic Partnership, he highlighted that Fiji looks forward to seeing how they can maximise the membership to assist the country’s post-COVID-19 economic recovery efforts.

On the issue of climate change, PS Karan remarked that Fiji welcomes the shift in American policy under the Biden-Harris Administration and commends the United States for its renewed commitment and support towards adaptation and building resilience within the region.

Commenting on the outcome of the recent US-Pacific Island Country Summit, he informed Case that Fiji stands ready to work in partnership with USAID in ensuring that the support provided is appropriately utilised to meet the challenges and priorities of the Blue Pacific region.

Another significant commitment highlighted at the meeting is the expansion of the Peace Corps operations in Fiji and the region.

He added that having the world’s premier international development agency at our doorstep speaks volumes of the commitment the United States has made to Fiji and the region and Fiji stands ready to provide the support that may be needed.

On the regional front, Fiji applauds the ambitious commitments undertaken by the U.S. in strengthening its engagements with Fiji and the region.

Karan highlighted that the 2050 Strategy is the region’s guiding document in engaging with our partners, adding that we look forward to working closely with the United States in progressing our relations further.

Congressman Case, in his response, thanked Karan for the productive discussion, further stating that the outcomes of the recent U.S.-Pacific Island Country Summit are a positive step towards our collective vision of improving the lives and well-being of all Fijians and the region.

He also acknowledged the progress of the Fiji-U.S. bilateral relations, highlighting that the U.S. will continue to explore areas of opportunities in Fiji and the region.