Rabuka to visit Kiribati this Friday 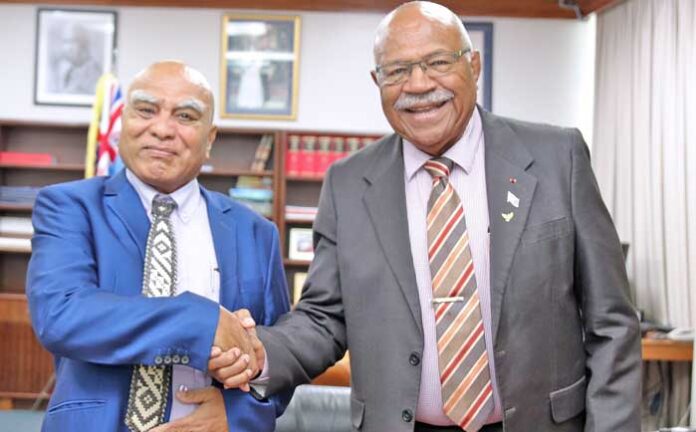 Prime Minister Sitiveni Rabuka is expected to fly over on his first official visit to the region, and meet with the President of Kiribati, His Excellency Taneti Maamau this Friday.

Yesterday, Rabuka met with Kiribati’s High Commissioner to Fiji, Tebuai Uaai, and discussed important aspects of this visit and the way forward to bring back Kiribati to the Pacific Islands Forum family.

They also discussed the prospects for future cooperation in key areas of development to address the common challenges.

The Prime Minister acknowledged Kiribati as a very close friend of Fiji, with deep people-to-people ties that pre-dates the colonial era.

Rabuka said the ties have been strengthened through the Banaban community in Rabi Island, which will always remain a key foundation of our relations.

“The restoration of Pacific Islands Forum’s (PIF) solidarity is a key priority for my administration and my role as the Chair of the PIFs. I also commend Kiribati’s willingness to remain open to dialogue with Forum Leaders towards a resolution.”

The Prime Minister said his visit to Kiribati is a crucial step in strengthening the bilateral relations and historical ties between the two nations.

“More importantly, it is also to seek Kiribati President Maamau’s counsel on the pressing issues for the Pacific region; prominent among them are climate change, oceans and economic resilience.

However, Kiribati’s High Commissioner Uaai said that Kiribati looks forward to welcoming the Prime Minister on his first official visit, signifying the strong bond of friendship and historical links between the two nations.

“It will indeed patch up what Kiribati had endured, and certainly strengthen the bonds and the very friendly ties between the Government of Fiji and the Government of Kiribati. Last but not least, it will renew the relationships across our Pacific family that are so vital for our region’s development,” the High Commissioner said.