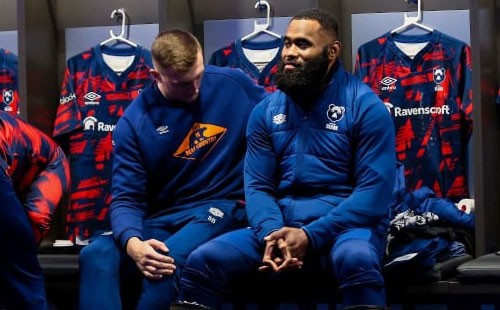 The Bears were quick to go on the score board with an AJ MacGinty penalty in the third minute before hooker Harry Thacker drove over from a rolling maul to score the opening try.

MacGinty booted the conversion to lead with 10 points.

Three minutes later, Harlequins finally got a tune out of their attack and responded through Josh Bassett pushing through the Bears defense but their conversion failed.

Radradra made an early impression, although not for the dynamic running skills that have been lost to the Bears for most of the season because of a knee injury.

First a tackle on Will Evans ended the openside’s afternoon inside the opening minute and then another challenge left Tommy Allan needing treatment.

A few minutes before the half time break, halfback Gabriel Ibitoye was confident in increasing the Bears points adding the side’s second try despite the conversion failing only to give them a 15-5 lead at half time.

Harlequins fought hard in the second half but poor ball possession failed to seem them securing points until the Bears were reduced to 14 men as try scorer Ibitoye was sent to sin bin for a shoulder charge.

In the final few minutes of the match, Cadan Murley dived for Harlequins second try and Tommaso Allan converted to cut the gap to three points but Bears held on.