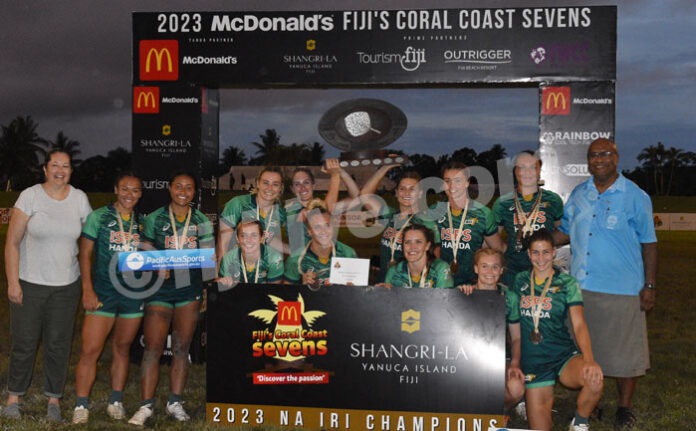 Lanky Australia women’s 7s forward Lily Dick says their goal is to win the 2023 HSBC 7s Series and qualify for the 2024 Olympic Games in France.

Dick, who was instrumental in the Australia A team’s win at the women’s division of the McDonald’s Coral Coast 7s, told Fijilive that a win at the Hamilton 7s is a must this week before eyeing a win on their home soil next week.

“The aim is to win the series again this year. The biggest box we have to tick is the qualification to the Olympic Games.”

“We want to record back-to-back series wins and at the same time prepare for the Olympic Games.”

“The team has set their focus that if we are to win the series this year, we’ve gotta resume it with the Hamilton 7s before we host the Sydney 7s.”

“Everyone is feeling the pressure but I think we were lucky to be part of Coral Coast 7s where we managed to play the games and see the areas we lack and what we are good at.”

“The HSBC tournaments are a tough task to win because we have to battle against top teams like Fijiana who are very physical, we have France who are not easy to beat and also teams like Japan, Canada and the USA who always try to fight us down.”

“Whatever we have to do has to start from Hamilton and that’s where we have set our sights on. We are drawn with New Zealand and of course not expecting anything less from them,” she added.

On Saturday, Australia will open its Hamilton 7s campaign against Japan at 10.22 am before facing Canada at 1.50 pm and round off their final pool match against France at 4.56 pm.