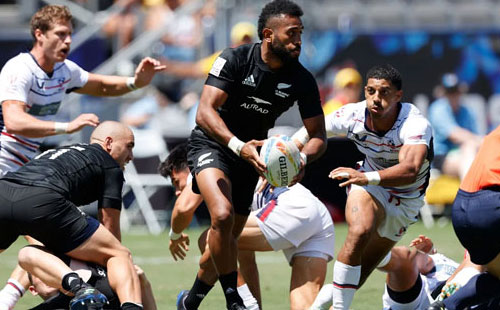 New Zealand 7s stars Akuila Rokolisoa and Amanaki Nicole, who have links to Fiji helped the hosts thrash Tonga 45-0 in their opening match of the Hamilton 7s at the FMG Stadium today.

The Kiwis proved too strong for the invitational Tongan outfit with Moses Leo scoring the opener in just a few seconds but the conversion failed.

Tonga could not resist the pressure from New Zealand and knocked the ball forward meters away from the try line.

Nicole made a fine set-up play for Regan Ware and he scored the second try for the All Blacks 7s in the third minute while Rokolisoa converted for a 12-0 lead.

Tonga tried to make a comeback in the second spell but they lacked ball possession which saw New Zealand dominate again.

Coming off the bench, Roderick Solo scored from a Nicole’s inflicted pass before Ngarohi McGarvey-Black bagged two tries and Brady Rush scored the last try while Black converted twice to seal the win.

Tabuya honoured to lead Govt in ...

WAF working to restore water in ...

SOE should resign after investig...