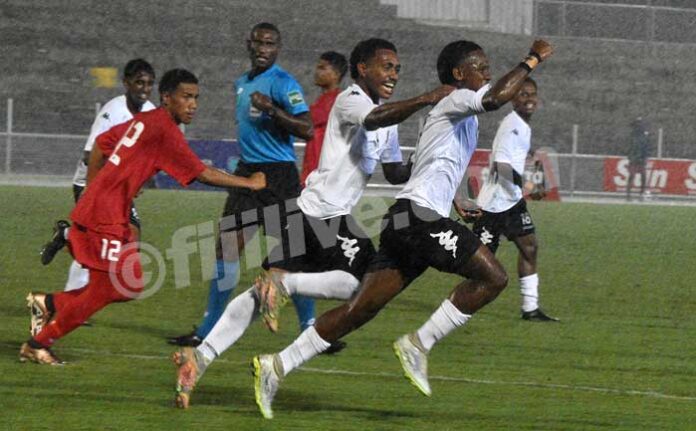 A 10-men Fiji Under 17 side booked a spot in the OFC Under 17 Championship quarterfinal after thumping Tonga 3-nil in their second pool match at the HFC Bank Stadium in Suva tonight.

The match was initially scheduled to kick off at 7pm but due to heavy rain, the match was delayed for 45 minutes.

Youngsters Jacob Seninawanawa and Petero Maivalenisau made their debut in the match in place of Vilikesa Vosagaga and Watisoni Batirerega who were benched by head coach Sunil Kumar.

Sydney-based striker Ibraheem Afazal took the free kick but he slammed the ball over the crossbar in the drizzling and wet condition.

Seninawanawa opened the account for Fiji in the 7th minute making sure that his debut paid off when he pounced on a Vinayak Rao corner kick which Tonga goalkeeper Siosiua Moimoi misjudged.

With Fiji up by a goal, the match intensified and Tongan forwards began to strike powerful shots at Fijian stopper Ilisoni Koroi but he daringly punched the ball away.

In the 24th minute, Tongan coach Lafaele Moala made a substitution by putting Va’inga Teu in place of Sione Tu’Ungafasi to add depth to their back line.

A few minutes later, match official flashed a yellow card to Fiji’s Sailimone Ravonokula for foul play and in the additional minute of halftime, he copped his second yellow card for continuous foul play which resulted in a red card and that saw Fiji reduced to 10 men.

Host Fiji led by 1-nil at the breather.

Some ill-discipline prevailed on the field which saw match official flash a yellow card each to Tonga’s Alexander Hola and Isimoto Vaihu for their foul play on Dilon Shankar.

A midfield set-up pass from Captain Aron Naicker saw Afazal take a powerful shot finding the back of the net, increasing Fiji’s lead to 2-nil in the 49th minute.

Tonga failed to resist the continuous pressure applied by Fiji which saw William Khan seal the win through a header in the 90th minute from a Prashant Kumar cross.

Fijian centre back Dilon Shankar was awarded the men of the match award.