Beach football on the cards for FFA 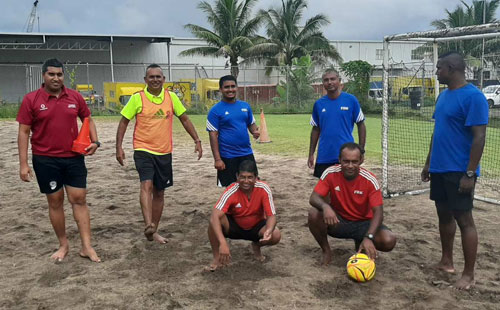 Plans are afoot for the roll-out of a national Beach Soccer League in the 2023 season.

Fiji Football Association chief executive Mohammed Yusuf says there has been huge interest shown by local clubs together with the announcement of Fiji’s participation at the OFC Beach Soccer Championship next year.

“We have seen the interest from players who want to play the code that is why we are focusing on developing the code around the country,” Yusuf said.

“We will surely participate in next year’s OFC Beach Soccer World Cup qualification and we will be bringing an expert coach from overseas to coach the team,” said Yusuf

“We will be going bigger and better in beach soccer next year so we have quality players who will understand the code well.

“It will not be necessary to have top football players but players who have skills and drills to play beach soccer.

Fiji FA Head of Futsal and Beach Soccer Jerry Sam said their aim is to grow the game giving game time to the players for more exposure in learning the code.

“We will participate in the OFC Beach Soccer World Cup qualifiers next year so we will select the players from the league.”

“There are huge potential players in beach soccer which I have seen during the championship.”

Fiji last participated in the OFC Beach Soccer Championship in 2009 finishing fourth and ranked third in 2011.