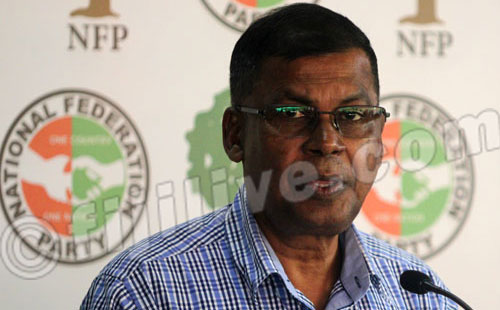 The National Federation Party has welcomed the statement made by the Commander of the Republic of Fiji and Military Force, Major-General Ro Jone Kalouniwai yesterday.

The Commander stated at the End of the Year Parade told soldiers that they must respect the results of the election even if they are unhappy with the outcome.

NFP Leader Professor Biman Prasad thanked the Commander for a very important statement to the nation that is about asking all registered Fijians to vote and also respecting the outcome of the General Election no matter their individual affiliations.

“It was absolutely a fantastic statement from the Mr Kalouniwai and I want to thank him personally because everyone that believes in good governance and everyone who believes in free and fair election will respect the outcome of the election.”

“This is what the people of Fiji want, every right thinking persons, this is what our international partner want, what the democratic world at large wants and Fiji has a chance this election to move away from dictatorship, move away from a two-men rule to a truly and genuine democratic Government that will be formed after 14 December.”

“The NFP/People’s Alliance are ready to be the next Government,” Prof Prasad said.

Bulitavu being questioned by pol...