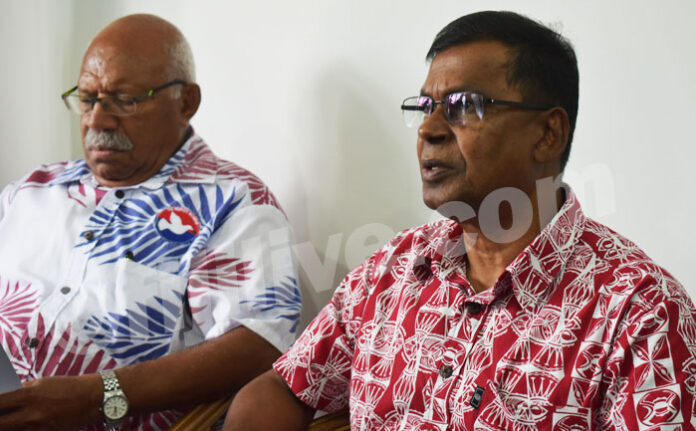 The People’s Alliance and the National Federation Party have condemned what they term are inflammatory and racially charged fabrications made by the FijiFirst, into alleged stone-throwing and other violent incidents in the wake of the formation of the coalition.

In a press conference this afternoon, PA’s Leader, Sitiveni Rabuka said that the General Secretary, Aiyaz Sayed-Khaiyum’s true to form, the outgoing Government reverts to his favourite habit of sowing fear and chaos when things are not in his favour.

“Like an anarchist, he is still trying to set the nation alight along racial lines by claiming that racially motivated acts are occurring in Ba.”

“Senior police officials have confirmed to us that these stone-throwing claims targeting Indo-Fijians are fabrications,” Rabuka said.

Also, the NFP Leader, Professor Biman Prasad also highlighted that senior party officials also validate that these incidents did not happen – there is not one shred of evidence available to back up these unhinged claims.

Prof Prasad said the truth is unpalatable to Sayed-Khaiyum.

“Just like he concocted stories of horrific to emotionally blackmail voters in the last two general elections. He is once again back to his devious tricks in the hope of convincing people that the government in waiting will not keep them safe.”

“He has the audacity to describe the outpouring of unbridled joy and a celebratory atmosphere o Tuesday night as divisive and reaching boiling point.”

“It displays the truly shameless character of Sayed-Khaiyum with firecrackers, tooting of vehicle horns, dancing and merry making as dangerous and a threat.”

“This is laughable and such a lunatic statements can only come from a sore loser who is constipated and suffering excruciating pain after being thoroughly rejected at the poll,” Prasad said.

According to PA’s and the NFP, almost 58 per cent of the voters have rejected the dictatorial and divisive policies of FijiFirst.

“This is a significant statistics. It means that the FijiFirst has lost the moral authority to no longer govern Fiji. No longer will FijiFirst be able to ride over roughshod over parliamentary democracy.”

“This 16 years of shame will soon become a thing of the past,” he added.