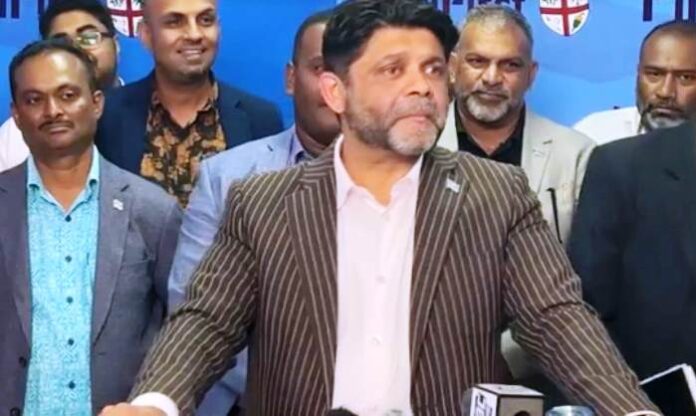 The FijiFirst Party has attacked the coalition Government for number of incursions into the separation of powers and breaches and assaults on the 2013 Constitution.

General Secretary Aiyaz Sayed-Khaiyum in a press conference on Saturday evening said the Party members met during the day and discussed a number of matters with respect to their strategy and the way forward but also quite worryingly, they discussed about some of the fundamental anomalies that are taking place under the coalition Government.

“Under any successful transition of one political party being voted out from one election to the other, there must be a fundamental adherence to the rule of law.”

“There must be adherence to the overarching law which is the Constitution that provides the legal framework for the Government.”

“What we have seen since 25 December is a number of incursions into the separation of powers and a number of policy announcements that breach procedures laid out in the Constitution.”

He said the Constitution is the supreme law and there is no process that can supersede it.

Sayed-Khaiyum also claimed that Prime Minister Sitiveni Rabuka has failed to acknowledge citizens the country as Fijians as stated under the Constitution.

“The Constitution clearly states in Section 5 that all citizens should be known as Fijians.”

“There has been a departure from Section 5 of the Constitution by the current Government.”

“Everyone is equally able to practice their religion as stated in Section 4 of the Constitution but the new Government is pushing out only one particular religion to the rest of the members of public.”

Sayed-Khaiyum also highlighted Section 134 of the Constitution regarding various constitutional offices and said officers cannot be removed from their positions unless it is for a cause.

He alleged that the Attorney-General Siromi Turaga and the Prime Minister’s Office called up some Commissioners and asked them to resign and they have received a few complaints from these Commissioners about this issue.

“The Prime Minister’s Office nor the Attorney-General have the authority to ask any of these commissioners to resign.”

Sayed-Khaiyum also mentioned that the Public Service Commission has no role to play in the appointment of ambassadors as Section 128 of the Constitution states that the Prime Minister on the advice of the Minister of Foreign Affairs may do the appointments.