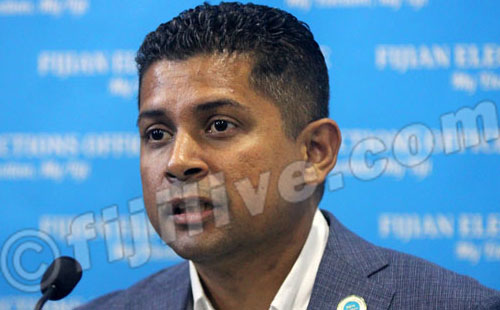 The Fijian Elections Office is concerned with voter turnout during pre-poll as only 64.94 per cent voters turned up at the 109 venues on the first day.

However, Supervisor of Elections Mohammed Saneem said these are preliminary numbers and are expected to change as they are waiting for information from 40 other venues which currently cannot be contacted.

Saneem said pre-poll is happening in areas which are far-flung and where information transmission takes time because it has to be done physically.

“Today is day 2 of pre-poll and they are expecting voting to take place at 143 venues.”

“If you are a pre-poll voter and you did not go to your venue, you cannot vote again.”

The Fijians Elections Office will be extending the time to vote in certain areas so that when students finish their exams, they can come and vote.

Saneem said if an ordinary Fijian is concerned that the voter turnout is low then the rightful thing to do is take some action and increase the turnout.

“The FEO will provide free transport, dependent that you call the toll free number 1503 and they will connect your call to the right person who will assist the voter on where the next pick up location with be, at which time and other relevant questions voters might have.”

“Everything has been made possible for people to come and vote and the only thing that is left is the person’s own intentions,” Saneem added.