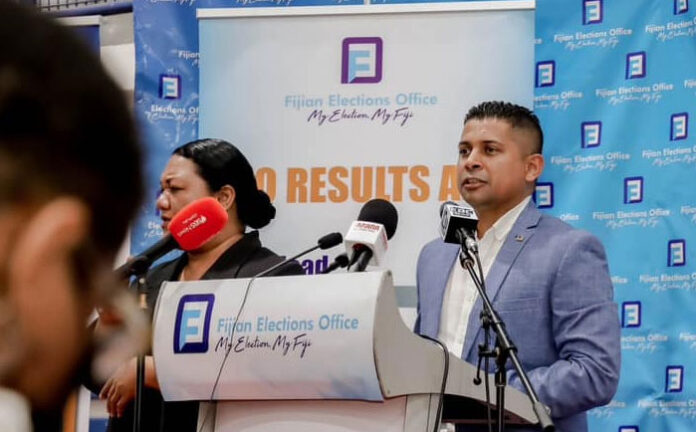 In a press conference this morning, the Supervisor of Elections, Mohammed Saneem said right now they have uploaded the data for 531 polling stations out of the 2,071 stations for provisional results.

Saneem said they have had to take the app and the results platform down because they published the last results with 507 polling stations they detected an anomaly in which they noted certain candidates had results that were 28, 000 and 14, 000 on the app.

He said to cure this; the FEO had to review the entire mechanism through which they were pushing out the results.

“The result management system is an offline system and a staging laptop is used to transmit the results to the app and the website. We had to see how the results changed, and we noted that it was in the process where we were transferring data from the staging laptop to the App.”

“Which is like when we were uploading it, in one instance the upload had been interrupted midway and this caused the mismatch of the ID of the candidate in the App to the staging laptop hence the vote numbers changed for the certain candidate who suddenly got allocated those votes in the app.”

He said that as a result they had to delete the data that was published and re-upload the result data on the App which has been published again.

Saneem also highlighted that it is not the exact same polling stations that they had initially uploaded, but it is the 531 sets of data that has been pulled by the laptop which is now uploaded.

“To ensure that the data that they publish remains correct, from now onwards, the FEO will be periodically before updating the web will email all media the result management system printout,” he added.